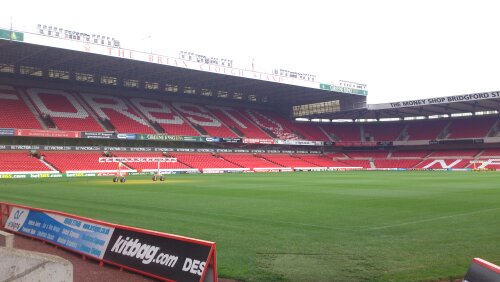 With the impending Championship season due to begin within a matter of days, I decided to dust off my laptop and got back to work. And the theme of this piece is simple, success may not be instant.

Having made my debut on The Forever Forest Podcast last week, I made reference to this very blog and the message within it. For those of you that are familiar with The Forever Forest podcast, my columns will be covered in the aptly named “Corrynation” segment of the show on a permanent basis from here on in.

It’s fair to say that Nottingham Forest’s activity in the summer transfer market has signalled serious intent on returning to the Premier League. But with the plethora of high quality acquisitions comes elevated levels of expectation from our supporters. And those supporters have really played their part in the red revolution by purchasing a record breaking 20,000 season cards for the upcoming campaign. As Forest fans we’ve gone from glass half empty kind of people, to a four-pint pitcher state of mind, within a matter of months. But, my only concern is that our supporters may be expecting miracles from the very first whistle of the season.

For those, like myself who attended the City Ground friendly against Bournemouth on Saturday, the performance of Aitor Karanka’s new look side has only intensified the expectancy levels. The technical ability of the Portuguese trio of Carvalho, Goncalves and Dias was breath taking at times, as Forest eased to victory over their Premier league visitors. What was just as pleasing for me personally was the performances of people like Danny Fox, Ben Osborn and Adlene Guediora, who was a strong candidate for man of the match.

The most important aspect of the victory was the strength in depth of our new look squad, we almost have two quality players for any given position. And this was personified by the likes of Lewis Grabban, Hillal Soudani and Joe Lolley, who picked up where the three amigos left off when they were replaced in the second half. It must have been soul destroying for Charlie Daniels and Simon Francis in the Cherries defence, who looked like boxers praying for the bell as they hugged the ropes.

The sheer quality and size of the Nottingham Forest playing squad is the very reason I’ve predicted a 5th place finish in the Championship this season. I know what you’re thinking at this point, “he’s preaching about over expectancy and then he goes and predicts a play off finish!” My concerns lie not with the demand for success but more about the time allowed for the squad to gel, both on and off the field of play. Of the Ten signings made by the club to date, four of those are different nationalities, with varying styles of play too.

Despite tasting defeat just once in pre-season, the first Ten games of Championship football provide a completely different level of complexity, and things may take time to come to fruition. If we find ourselves starting slower than our rivals, I’d like to think that our supporters will refrain from throwing the toys out of the pram. For the fickle among us it would be an excuse to say “We’ve invested in 20,000 season cards for this rubbish!” And believe me, they do exist, like the so-called Forest fan that berated Mr Marinakis for having ONLY donated 1 Million euros to victims of the Greek wildfires. But, as a former team mate of mine, and a bloody good one at that  by the name of Andy Frawley used to say, “the cream always rises to the top in the end.”

These are exciting times for Nottingham Forest but if we take a month or two to click into gear, be patient and maintain that loving feeling.