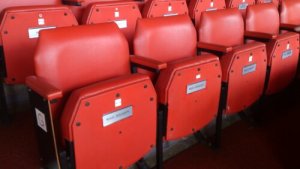 17-year-old Ben Brereton wrote himself into Nottingham Forest folklore on Saturday, his winning goal was a fitting tribute on the fifth anniversary of Nigel Doughty’s passing.

It was certainly a day for landmarks and the television cameras were there to capture it all. Gary Brazil masterminded a third win in four matches as the Forest caretaker manager and surely rubber stamped his position, until season’s end at least. A motion that I have been a massive advocate of, so much so that I spoke passionately about it on BBC Radio Nottingham’s Matchtalk show.

Let’s not get carried away though, there are important things to take into consideration here, like the fact that current owner remains in the hot seat and that the standard of opposition has been kind of late. However; you can only pick the players at your disposal and beat the teams that are placed in front of you. Forest have won their last three home games without setting the world alight, but can you name me a Championship side that has? Newcastle? Speak to any Geordie and they’ll tell you that they’ve had to grind out the large majority of their victories. This division is a very even playing field and if you are prepared to graft, you’ll very rarely be outclassed by anybody.

I was fortunate enough to watch the Aston Villa match from an executive box for the very first time, and even luckier to sit beside former Forest legend Colin Barrett. Colin is the president of The Munster Forest Supporters Club and was attending with his close friends from Ireland. It was great to get his take on things, most of which I really agreed with. The thing that hit home the most was his comment on selecting Championship style players to achieve results, he pointed out that Gary Brazil’s decision to omit most the foreign signings has been the foundation for his success.

Given the sentiments of Colin Barrett and a large majority of Forest supporters, it’s no surprise that players like David Vaughan are not only playing regularly, but excelling once again. The Welshman was man of the match on Saturday and justified my perpetual belief in him. Recently I wrote an article about the necessity to pick this guy every week, which was met with a barrage of stereotypical comments. The pick of the bunch was the view that “his legs have gone and that he’s ready for the scrap heap”. It’s all about opinions of course but I find it almost impossible to respect those which emanate from behind logos and generic profiles.

The first half against Aston Villa was a scrappy affair apart from the wonder goal that gave the visitors the lead; Jonathan Kodjia’s goal after 18 minutes was a moment of sheer class. He curled a beauty of a shot past Henderson from the edge of the box after receiving the ball from Jack Grealish. There was a touch of fortune about Britt Assombalonga’s equaliser just before the break, but the Red’s top scorer pounced at the right time for his 9th of the season. Perhaps the most fitting part of the first half was the collective applause, to mark the fifth anniversary of Nigel Doughty’s passing. A gentleman who loved Nottingham Forest and who will be forever respected by the club’s supporters. Which cannot be said about the current owner, regardless of his millions and new signings, he’ll NEVER earn the love and adulation that he craves so much!

Despite the fact that Nigel Clough turned down Fawaz regarding the manager’s role at Nottingham Forest, his namesake made his debut following a £2.5 million move from Bolton Wanderers. Zach Clough had a steady first game but he is a young man with much potential and must be given the opportunity to develop. Another very young man is developing at some pace indeed; Ben Brereton has made the transition from under 18s to first team football look rather easy. I first wrote about this lad back in 2015, he was just 15 years of age when I went to see him play at the academy. He scored four goals that day and I vividly remember concluding the piece by saying that he was on course for his professional debut in the very near future. Well, after just three appearances from the bench, he’s notched his first senior goal already. His winning strike, in stoppage time to beat Aston Villa was taken like a seasoned professional. He had the awareness to anticipate the knock down from Britt before planting his volley past Sam Johnstone, and give us supporters a moment to remember. Off the top of my head, without googling, I think that Lee Glover’s goal against Leyton Orient might have been the last by one so young in a Forest shirt?

The fact that there are so many graduates from the Nigel Doughty academy in Forest’s first team squad, is testimony to the work that Gary and Jack have done over the past few years. The likes of Brereton, Cash and Worrall will only improve under the guidance of the pairing and the older pro’s certainly respect them too. With Fawaz Al-Hasawi still in charge (for now), an external appointment would have only complicated matters at this time of the season. Thankfully we have the right guys in charge, and a starlet that was born somewhere between Brazil and Lester.