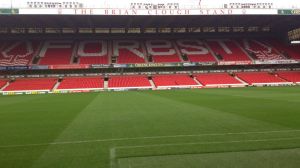 When the heat was on, and the pressure was high, Warburton rose to the occasion; and I’m not talking about a loaf of bread!
Despite being under a bit of criticism following a poor run or results of late, the Nottingham Forest manager rallied the troops and defeated one of the Championship’s best sides. Before anyone opposes my opening statement, take into account that the Blades have dismantled both Wolverhampton Wanderers and Sheffield Wednesday in the last fortnight.
However; things started very badly for the reds, who were one nil down after just two minutes! United went for the kill from the moment that first ball was kicked, and fair play to them for doing so. Warburton himself commented on the Yorkshire outfit’s bravery as they enforced their attacking mentality from the outset.
So; place yourself in the shoes of an under fire manager and ask yourself what you’d do next? Personally, I’d say that at the very moment Forest went behind, Warburton was as vulnerable as he’s ever been. But; the former Rangers boss rose to the challenge like a phoenix from the flames. Those of you who are on speaking terms with Peter Shilton will know that the Phoenix is a different animal to a Pheasant; and more importantly, that neither begin with the letter “F.” (Private Joke)
Warburton reverted to a 4-4-2 for the remainder of the contest, and it was a formula for success. The reds drew level when Ben Osborn’s awful corner kick somehow found Jason Cummings. The young Scotsman intelligently equalised with zero back lift, which was of no surprise to his manager. Despite missing a gild edged chance in the Fulham Game of late, Mark Warburton showed real faith in his striker and was rewarded in doing so.
The Forest manager showed real character by selecting Cummings again, many, including myself, would have banished him to the bench following his misfire display against Fulham. However, Mark knows that his youthful Scotsman is a born finisher; and cometh the hour, cometh the man. From that moment on, you just knew that with a 25,000 plus crowd, the City Ground would roar their team to victory.
That confidence was personified by Kieron Dowell, who despite being prematurely substituted last week, proved his worth by bursting into the box to blast home the winning goal. A goal that not only provided us with a lead to protect, but one that instilled the belief, that we could match and better the teams around us.
At this point I must admit that I only arrived at the City Ground for the second half! For those of you that know me, you’ll know that I have to commentate at Mansfield Town home games. Before you question my commitment to my season ticket, let it be known that my website manager was in place as usual, and bang on the money as far as the action was concerned. For the keyboard warriors out there, I’ve missed one game this season!
The second half; which was the one I saw, was a real show of character and determination. Danny Fox was forced off at the interval despite having a decent game, and the Blades looked like they’d equalise at any given moment. But, it was those fine margins that provided three, priceless points.
Fine margins, those two words, the majority of the haters were preying upon. Yes, we missed chances, and so did the away side, but we were never outclassed during the contest.
I spoke to Jonny Owen last Thursday and he said “Mark my words, Forest will beat Sheffield United pal!” I replied by saying “Do you believe in miracles? To which he brilliantly replied, “I believe in Mark Warburton!”
Nuff said!