On April 9th 1989 a Nottingham Forest player delivered arguably the greatest goal assisting pass ever seen at Wembley stadium, and after almost thirty years Tommy Gaynor talks at length about that day and his time with Brian Clough’s red and white army.

Despite leaving the City Ground in 1992, whenever the Irishman’s name is mentioned, you’re immediately greeted with a chorus of “oooh Tommy Gaynor” by anyone lucky enough to have seen him play.

So, when I found out that he was attending the Munster Forest charity event in County Kerry last summer, I was determined not to let such an opportunity pass when it came to interview the man himself. 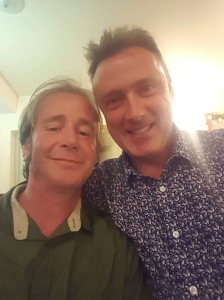 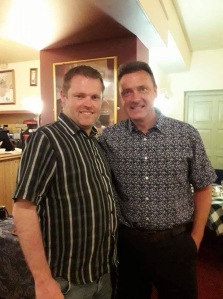 I had the enviable role of comparing the Q & A session with the numerous NFFC legends in attendance. Personally, gauging the thoughts of Tommy Gaynor was the highlight of the evening, a man who at the age of 55, looked like he’d been cryogenically frozen for the last twenty six years.

In early 1988 Tommy Gaynor was playing in front of one thousand six hundred people at Doncaster Rover’s Belle Vue stadium, eighteen months later he was a double Wembley winner with Nottingham Forest. Gaynor’s contribution in the 1989 League Cup final was immense and for many he was the real man of the match, which is some return for the miniscule £25k that Clough paid for his services.

I asked Tommy all about that famous cup win over Luton; “I always roomed with Des Walker on away trips and neither of us could sleep prior to the final. We went down to the hotel games room at 10pm where Cloughie and the coaching staff gave us two beers each and played snooker for the next couple of hours, we both slept really well that night and played well the following day, great management!” Can you image Pep Guardiola doing such a thing?

I then asked Mr Gaynor to talk me through “that” pass, Tommy said “I picked the ball up in my own half and drove forwards down the right flank,” he had a cunning grin on his face as he concluded the story. “I looked up and saw something that I’d never seen before……Neil Webb sprinting, I picked him out with a long Crossfield pass and he finished it beautifully, that was real turning point in the game.”

I then dared to broach the subject of Stuart Pearce and the quotes he made about Tommy regarding the Cup win bonus in his book. Pearce had basically accused Tommy of not contributing to the victory meal costs following the final. “I’m unaware of the comments having not read the book, regarding myself and Stuart Pearce, we had a working understanding and that is all!”

And, what about life under the management of Sir Brian Clough? “He was very hard to make out” said Tommy. “I’d scored a hat trick away at Chester on a Wednesday night, on Friday the team sheet came out for QPR the following day and my name was on it to play. I arrived on the Saturday to find that it had been changed and that I wasn’t even on the bench, after the buzz of my midweek performance I was obviously disappointed, things like that really affect your confidence.”

The Irishman then provided an account of pure hilarity regarding his former manager, “on one occasion I was playing really well when my number came up from the side line, slightly bemused, I made my way off the field and took a seat in the dug out. Five minutes later, Mr Clough turned to me and asked “what the hell are you doing here son? Having explained that he’d taken me off, the gaffer replied by saying “Oh, I thought you were Phil Starbuck!”

Despite leaving Forest twenty six years ago, Tommy is massively well revered among our supporters, I explained to him that Forest fans still break out into the “Oooh Tommy Gaynor” chant whenever his name is mentioned. He smiled and was quick to reciprocate, “Yes, I got on very well with the supporters, I always made time to chat, sign autographs and take photos. I always gave one hundred percent whenever I played for Forest, good or bad, they appreciated that.”

Tommy Gaynor is remembered for so much more than the two assists in the 89 Cup final, however, one of my personal favourites was his eighteen yard overhead kick in a 4-0 victory over Alex Ferguson’s Manchester United. Despite it not going in, Steve Chettle was on hand to tap home the rebound after it crashed against the crossbar.

But, what is Tommy’s favourite goal in the garibaldi red of Forest? “Huddersfield away on route to the 89 Cup win, I collected the ball in the left back spot from Steve Sutton, I then ran the length of the pitch before smashing it home. My old boss Eoin Hand was Huddersfield boss at the time and presented me with the man of the match award after the 3-3 draw. As he passed me the award, he said “Isn’t that your bus leaving the car park?” I had to shake hands and run after it!” Another classic day in the life of playing for Brian Clough, you can’t help but think that this was the maestro’s way of keeping his player’s feet firmly on the ground after doing so well.

Whilst on the subject of Brian Clough, I wanted to know if Mr Gaynor was insulted by his gaffer’s comments regarding his omission from the NFFC squad on a certain occasion. Tommy had been playing very well and even keeping Nigel Clough out of the Forest side, so when he was left out of the entire squad the press were quick to ask if the Irishman was injured. Brian Clough responded by saying “He’s Irish, he probably fell over coming back from the pub.” Tommy told me that he didn’t remember the quote, but it was his manager’s typically funny way of dealing with things, “It certainly wouldn’t have offended me that’s for sure.”

I’m absolutely honoured to have spoken with Tommy Gaynor, and I was blown away by his dignity and humility at the Munster event. It’s unbelievable to think that the Limerick man hasn’t stepped foot in Nottingham since 1992, but I’m pretty sure they’ll be high demand for his presence following this unexpected re-emergence.

The L word gets thrown around all to flippantly these days, but the big man certainly constitutes Legend status in the eyes of many a Nottingham Forest supporter; oooh Tommy Gaynor!