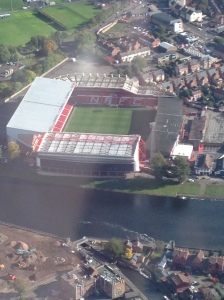 Usually I steer well clear of the pre-season campaign, because for all intents and purposes, it has no bearing on how the competitive calendar will pan out.

I hated it as a player, where running us until we vomited was the norm. It’s always nice to mix it with the higher class opposition but even if you beat them, it counts for absolutely nothing. If you need evidence of my scepticism then cast your minds back to the summer of 2009, when Leyton Orient battered Chris Hughton’s Newcastle United 6-1.  The Toon army went onto win the Championship that season, amassing the 100 points total in the process.

However; given the wholesale changes at Nottingham Forest since the fall of the dictator, I’ve paid a little more interest ahead of the 2017/18 season. A handful of new signings have been added to a pretty decent squad so I’m confident that we can improve drastically on last season’s positioning (we can’t do any worse).

The likes of Jason Cummings, Barrie Mckay, Daryl Murphy, Andreas Bouchalakis and Tendayi Darikwa have all had decent run outs since signing for Nottingham Forest in the summer. Mark Warburton has hinted at more new arrivals and I for one welcome the addition of a midfield playmaker, the only area of the field that concerns me to be honest. We must tread carefully where such matters are concerned though; worryingly, a number of NFFC supporters are demanding big money acquisitions following the sale of Britt Assombalonga to Middlesbrough.

The usual #nffc trolls have been out in force of late too; you know the season is about to start when they suddenly cease being political aficionados and switch their parliamentary voodoo dolls for their least favourite Forest player. The hate mob really needs to take stock of what direction the club is now heading in. Rome wasn’t built in a day but Nottingham Forest has been systematically dismantled over the last five years. Be patient; Messrs Marinakis and Kominakis are rebuilding the club in a realistic manner and more importantly, with the right people in place. So before you scream that we’re lacking ambition, be thankful for the many articulate decisions that have already been implemented.

Returning to the field of play; I’ve been impressed with the use of personnel and formations during the few games played over the summer. The re-emergence and stunning form of Apostolos Vellios in particular has been the highlight for me personally, I wasn’t too kind to the Greek striker last season but his attitude thus far has been commendable. He has basically made it impossible for Warburton not to start him next Friday. The form of Barrie McKay has been a close second; he’s added some real electricity on the flanks, something that has been lacking since the disgraceful sale of Oliver Burke. The addition of Daryl Murphy has pleased me too, though like most people I’m surprised to see him getting a three year deal, there’s no doubt that he’ll get into double figures at least. For anyone that insists on us paying silly money for a 20 goal a season man; bear in mind that the last Forest striker to achieve that feat was David Johnson, way back in 2003!

Having seen the Reds play a 4-2-3-1 and also a 3-5-2 it helps dismiss the theory that Mark Warburton is something of a one trick pony, without a plan B. The only thing that concerns me during the pre season matches I’ve witnessed is the deployment of Ben Brereton out wide. He looks completely lost when he’s not down the middle but I’m sure the management are aware of this; and that’s what friendlies are for at the end of the day. Given the fact that both Brereton and Joe Worrall have lifted trophies for England of late, their confidence will be sky high for the upcoming season, which is another little cause for optimism.

In a nutshell it’s been a well structured and measured approach to the new campaign; one that will be massively enhanced by the 16,000 strong season ticket holders. We supporters must be patient and realistic for the forthcoming months; miracles won’t happen overnight but we’re definitely heading in the right direction and with the right people in place too.

Pragmatism is the word of the day and is one that will lead us to better things if we get behind the new regime. The future’s bright; the future’s Garibaldi!